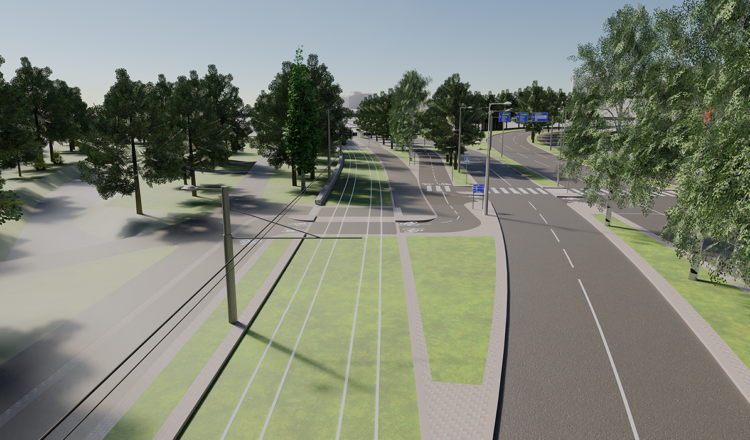 When the project is completed in 2024, the new tram line 13 will take passengers from Kalasatama to Pasila in 15 minutes. Construction work will start in Hermannin rantatie in January 2022.

HKL and the City of Helsinki’s Urban Environment Division have approved the target costs of the Kalasatama-Pasila alliances, Sörkan Spora and Karaatti, and they will enter the implementation phase starting from 19 November 2021. The development phase of the project started in May 2020.

The Kalasatama-Pasila project consists of the construction of tram line 13 from Nihti via Kalasatama Centre and Vallilanlaakso to Pasila. At the same time, streets, pedestrian and cycling routes, the green environment and municipal technology will be renewed along the route. In Pasila, changes are also being made to the existing track and streets. The aim is to start commercial transport in 2024.

“Our journey and cooperation during the development phase have enabled us to reach this point, where we will enter the implementation phase. We now have a jointly agreed total delivery, on the basis of which we will continue the joint journey towards the project’s goal in 2024. I would like to thank everyone involved at this stage,” says Project Manager Mikko Asikainen.

Together with GRK, AFRY is involved in the Karaatti alliance, which is responsible for the planning and implementation of the project from the northern part of Hermannin rantatie via Vallilanlaakso to Pasila. Gradual implementation is a characteristic feature of Karaatti’s part in the project, but everything will be ready in 2024. Work is already underway in Pasila, and now work is also starting on Hermannin rantatie. Vallilanlaakso is waiting for the town plan to be approved, and construction cannot yet be started. In particular, Vallilanlaakso’s short construction time requires seamless cooperation between the planner and the builder as well as consideration of the needs of stakeholders when coordinating plans and optimising work phases.

“Kalasatama-Pasila is an ambitious urban development project, in the implementation of which the entire service offering of GRK is represented. We are pleased to say that together we have found solutions in the Karaatti alliance that will enable us to enter the project implementation phase,” says Jouko Viitala, Head of Unit at GRK Infra Oy.

“The tramway complements Helsinki’s sustainable mobility network and supports Helsinki’s vision to be the most functional city in the world. The future of transportation travels more and more on rails, which is why it is great to be involved in this project,” says Mikko Inkala, Director of Infrastructure Planning at AFRY.

A cozy and sustainable urban environment

The new tramway connects the public transport hubs of Kalasatama Centre and Pasila. Along the tramway, the comfort, attractiveness and safety of the street environment will improve. The conditions for walking and cycling will also improve significantly. In addition, the tramway to be built will be connected to the Kruunusillat tramway in Nihti, which is estimated to be completed in 2027.

In implementation and maintenance, the focus is on sustainability and responsibility. The project will recycle land masses and use recycled stones and furniture. Low-carbon concrete is used in pile slabs, which are built in significant numbers due to weak ground conditions. Responsibility work is verified by CEEQUAL certification.

More information on the project and its impact on residents can be found on the website of the Kalasatama-Pasila project.

The illustration shows a view north of Hermannin rantatie at Nylander Park.
Picture: The Kalasatama-Pasila project