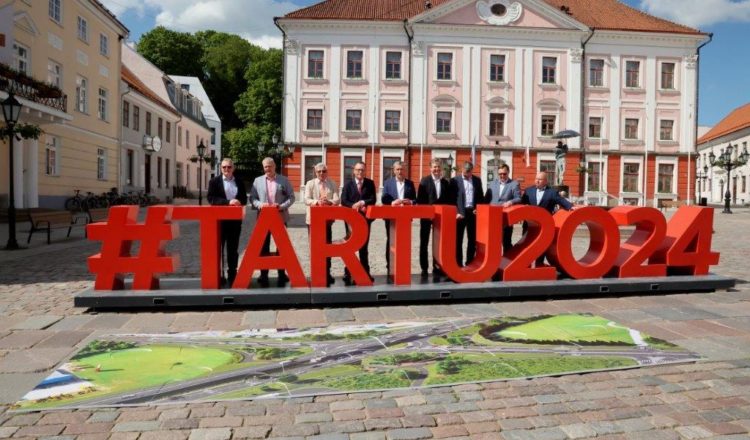 Today, the construction contract for stage II of the construction of the western bypass in Tartu was signed. The large-scale construction and reconstruction work on the Tallinna–Tartu–Võru–Luhamaa main road and related local street network will commence in June and last for two years. The construction area will also include the Riia roundabout which will become grade separated.

According to Mayor of Tartu Urmas Klaas, this transport node has been long awaited in Tartu. “I’m delighted that Riia roundabout, one of the most hazardous intersections in all of Estonia in terms of the number of accidents, will now be safe. In addition, the new transport node will divert transit away from the city, playing an important role in shaping the environment we live in. There has been excellent cooperation between the city of Tartu and the Estonian Transport Administration preparing the project. I hope that the construction phase will be just as seamless and won’t prove too much of a disturbance for the daily commutes of residents of Tartu and people in southern Estonia,” said the Mayor.

Kaido Padar, Director General of the Estonian Transport Administration, admitted that the contract is one of the largest investments (in monetary terms) ever made by the state in the infrastructure of southern Estonia. “The goal is to increase traffic safety, improve the capacity of intersections inside the city, when driving through the city and also when driving into the city,” said Padar, adding that the first two years of construction will be intense and involve many changes as well as inconveniences in the construction area. “We will do our best to make it as convenient as possible to get through the site.” Considering the complexity of the project and the number of structures and utility networks, the length of the construction period we have established will pose big challenges to the contractor.”

According to Tarvi Kliimask, CEO of GRK Infra, the main contractor carrying out the construction work, the first stage of Tartu roundabout built by GRK Infra AS serves as a great example of how to make things faster, safer and more convenient for road users. “We are now looking at 21 consecutive months of challenging work tasks and restrictions for road users, but all for a common goal – to ensure safer and more seamless traffic in the most frequently used transport node in Tartu. Please take your time and be patient if you are unable to avoid taking the Riia roundabout for the duration of the construction activity. Let the constructor work as quickly as possible and we promise to complete the work on time and ensure a high-quality result,” said Kliimask addressing road users.

The goal is to improve traffic safety levels, make traffic smoother and increase capacity. The design solution for the Riia transport node focuses on the movement opportunities for non-motorised road users and aims to facilitate the movement thereof where possible.

In total, ca. 8.4 km of cycle and pedestrian tracks will be reconstructed or added. Five grade separated crossings will be constructed for pedestrians and cyclists, two of which will consist of two separate viaducts or structures.

Construction work must be completed within 21 months, by the start of 2023.

Teedeprojekt OÜ is the designer of the second stage of the western bypass in Tartu, GRK Infra AS and GRK Infra OY are the main contractors and BRP Insenerid OÜ will be carrying out owner supervision. The cost of procurement, along with any unforeseen works, amounts to 29,214,814.68 euros.